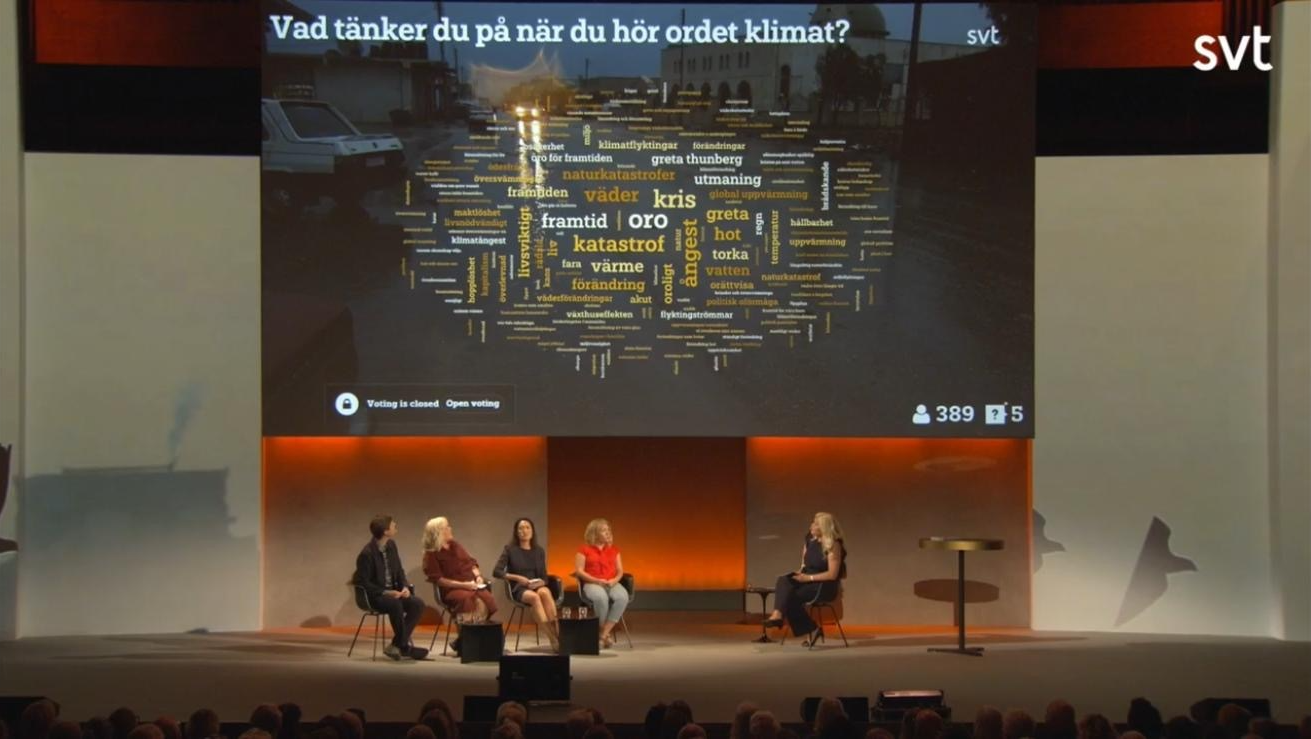 Sveriges Television AB (SVT), is the Swedish national public television broadcaster, funded by a public service tax. In the fall of 2019, SVT used Mentimeter in a live TV broadcast. The event was a first of its kind; a live public broadcast with their global correspondents, taking place in front of a live audience in the crowded concert hall. But the audience was not only there to provide a passive, listening crowd - they were an integral part of the show.

Mentimeter enabled the panelists on the show to listen to the voices of the audience in real-time by using interactive questions such as Word Cloud and Q&A. The event was a success and by the end, more than 1000 votes from the audience were collected in Mentimeter and over 100 000 people saw the broadcast live. "SVT had been using Mentimeter internally for a while, but this time they wanted to go big and use it on live TV. They saw the potential it has in terms of audience interaction and thought, hey, why not use this to communicate with our viewers” says Francis, who helped facilitate the event. The show, called “Korrespondentera” (The Correspondents) featured a panel of Swedish foreign reporters discussing current global events. The show has been running for over 12 years and has become a natural part of SVTs news shows. This time, however, they wanted to try something new: have the audience participate in the discussion."

The producers of the show wanted a quick and simple tool that also would allow them to review the responses before showing them to the audience,” says Johan, who helped with technical setup. “And that’s where Mentimeter really shines - using the World Cloud question, we were able to receive around 1000 votes simultaneously” he continues. The hosts used the World Cloud question to ask the audience questions such as “What do you think of when you hear the word climate?” or “What is the most important tool for a journalist?” Throughout the show, the panelists opened the question for voting in Mentimeter. The live audience, using their smartphones, was then able to submit their answers which showed up instantaneously on the screen. The more common an answer, the bigger the word.

The voting was not limited to the audience in the concert hall - anyone watching the broadcast at home could participate in the Mentimeter presentation, simply by using a smartphone or any device with a web browser. Long gone are the days of call-in voting or polling by SMS - here the producers were able to build a fully interactive experience for the audience (no matter where they were watching from) using Mentimeter. By using the power of interactivity, the hosts were not only able to get a quick overview of what their live audience knew or thought about the subject; the instant audience responses also gave them a basis for panel discussions. By the power of listening, they were able to be heard.

The panel also made use of another powerful feature in Mentimeter: the Q&A question type. This allowed the show hosts to use actual questions from the audience - submitted during the live broadcast. As live events go, time is crucial. The moderators had about 2 minutes to collect questions from the audience in Mentimeter, review, and select appropriate ones to use for the panel discussion. “For a first-time live use, it was a success,” says Mirek from SVT who was in charge of the technical production of the show. “It delivered very well and integrated nicely into our own live mobile app called DUO” he adds.

”It was an absolute pleasure to use Mentimeter and make the event more interactive,” says Hala Asfar, the event coordinator from SVT. “I also spoke to some people in the audience about the interaction and they all loved it and were very happy to use it. The Q&A point was wonderful. We will definitely work with Mentimeter again!”